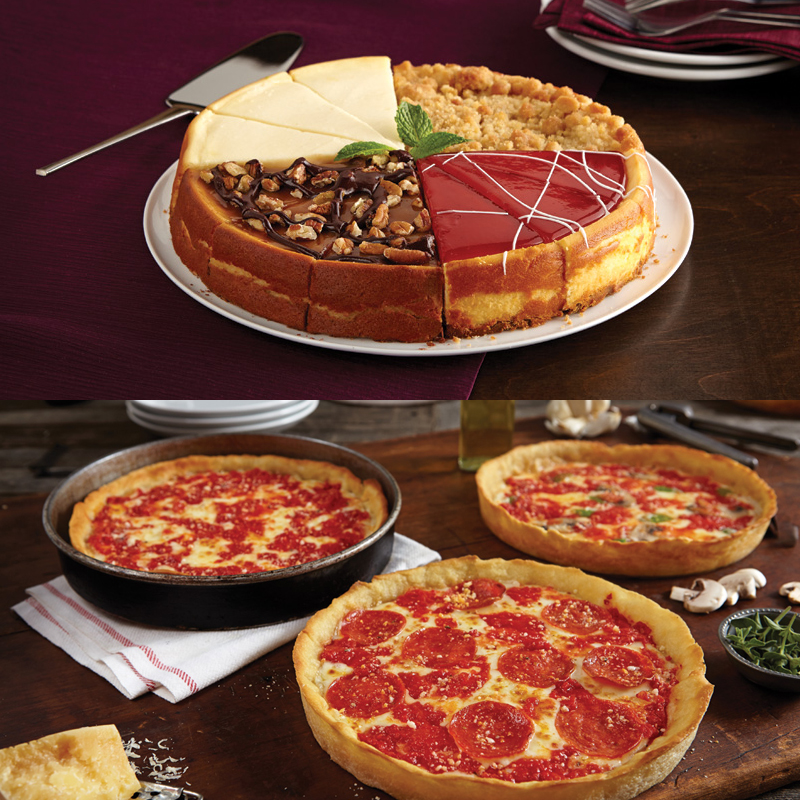 A slice of Lou Malnati's deep dish pizza followed by a slice of Eli's Cheesecake sounds like a great meal to us! Lou Malnati's legendary pizzas are hand-made from scratch with mozzarella cheese, vine ripened plum tomatoes, and fresh toppings layered upon a flaky, buttery crust. Don't forget to save room for cheesecake! This Eli's Sampler Cheesecake has a variety of delicious slices to choose from: Original Plain, Turtle, White Chocolate Raspberry, and Apple Streusel.

"Always love/eagerly anticipate my pizzas! First time that I've ordered Eli's cheesecake. It did NOT disappoint! As always, thank you! Jill S"

"I've ordered several of these packages throughout the years they are always a HUGE hit. Great pizza I've gotten a few New Yorkers to admit they're awesome. Quality is amazing and great service. "

Hope From Columbus, OH
Excellent as always!!
Always love/eagerly anticipate my pizzas! First time that I've ordered Eli's cheesecake. It did NOT disappoint! As always, thank you! Jill S
Jill
The best Chicago has to offer!
People out of state love our food!
Jack From Chicago
Always Perfect
Can't duplicate the best pizza in the WORLD!!!
Wendy From Temucula, CA
Pizza/Ceesecake Sampler
Product got here in two days and was perfect. The pizza and cheesecake were awesome!
Mike From Newport News, VA
Big hit birthday present!
I bought this for my coworker and her family for her birthday they all loved it.
For Kathy From Obetz, OH
Yum!
I've ordered several of these packages throughout the years they are always a HUGE hit. Great pizza I've gotten a few New Yorkers to admit they're awesome. Quality is amazing and great service.
Hope From Columbus, OH
Perfect as always
Sending Lou Malnati's pizzas and cheesecake from a Taste of Chicago is absolutely awesome each time. From start to finish, it's easy, reliable and a gift that people LOVE. I even entered a partially incorrect address and was able to call, spoke with a real person without having to go through a bunch of voice prompts. The man was friendly and quickly accepted the correct address. Order was filled as promised. It's great to even get the email confirming delivery. We've ordered through Taste of Chicago for more than 10 years and have NEVER been disappointed!!!
Darlene From Algonquin, IL
Pizza & Cheesecake Combo
This was the 2nd time ordering from Tastes of Chicago. I love the ease of ordering and having it delivered when I want it delivered and that I receive updates on my order. However, the best is the pizzas. I know that our household will continue to order pizza from Taste of Chicago
Diane From Pittsburgh, PA
Pizza gift
Send the pizzas n cheesecake as a gift. I was told the family enjoyed both items.
Maria
Always Great!
We've ordered from Lou's many times, (actually, for several years) and they NEVER disappoint! Quality is fantastic, and shipping is great!
Karen From IL
Amazing!
All was amazing! Thank you!
Cat From Newport Beach, CA
Amazing
So So good! I sent gift to my daughter who is a culinary student on extern in Chicago, she loved it!
Catherine From Newport Beach, CA
Fantastic!
Pizza/Cheesecake sampler sent as many presents!
Katie From Chicago, IL
perfect
Food and delivery great as usual.
Kate From Chesapeake , VA
California Cousin Loves Tastes of Chicago
Birthday made happy with Lou Malnati's Pizza & Eli's Cheese Cake
Ted From Chicago, IL
Very Satisfied....
Everything was great. The cheesecake and pizzas came very nicely packaged. The food was excellent.
Rose From IL
Great!
Everything was great!
Stacie
Taste of Chicago
3 pizzas
Melody From VA
not resolved
this order is supposed to be being checked on with ups. incorrect address given and package would have been delivered across street. spoke with Robert at lou's and he said he would investigate. have not gotten results. thanks and please let me know result.
martin
Definitely worth it!!!
I visited Lou Malnatis on my last trip to Chicago and absolutely loved it. Being my first time there a friend recommended it to me and it was worth the wait. While there I noticed that they delivered so I decided to order a few pizzas. They pizza was great and was really easy to prepare. I also really liked the cheesecake sampler as well.
Damion From New York, NY
Best Pizza
Lou Malnatis Pizza
Gloria From Reidsville, GA
From Chicago to Georgia
Very pleased with the time it took to get there and the overall package. I would recommend this to a friend.
Becky From Chicago, IL
Excellent!
The pizza was great. The cheesecake fantastic. Packaged very well. Would highly recommend!
Jen From Corona, CA
(Sausage,Spinach,Veg, Sampler) Pack
2nd time ordering from Lou Malnati's online. First time the package was lost/stolen (UPS and LM both take no responsibility). Best part about the pack was the cheesecake; being born and raised in New York makes me savor the quality even more. The pizza's themselves (Sausage,Spinach,Veg) were inconsistent; The crust thickness kept increasing until the Veg felt as thick as a deep dish Pizza Hut crust. Sausage and Spinach were pretty good. I've had Chicago deep dish before, in Chicago, and these feel a little lacking in the cheese and saucy departments. I wanted to post this in case my description is what people want in their pizzas. For myself, it was merely average (except for the awesome cheesecake).
George From Boca Raton, FL
19 More Reviews
Have you purchased this product? Write a Review 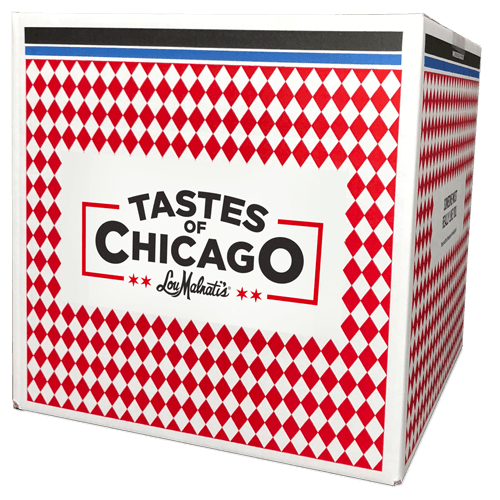 /category/Elis_Sampler_Cheesecake_Combos
Login Create Account
OR
Continue as Guest
WE ACCEPT: